One night when my wife had returned home to Cork I was staying in the Yalta Hotel with some colleagues. When I mentioned that it was my wedding anniversary a group decision to celebrate it in style was agreed spontaneously. Our first port of call was the ground floor restaurant. When we entered we were struck by a vibrant air of tension the source of which was soon obvious. A large group of men were sitting at a long conference table and a number of thugs armed with sub-machine guns were distributed around the room. The waiters were shaking and tense as they hurried to bring more drink to the conference table. We had stumbled on a Mafia meeting obviously one intent on conflict resolution. The opposing chiefs sat in the middle of each row facing each other. The exchanges were pretty brusque but finally the two chiefs rose and shook hands and everyone relaxed. We hurriedly finished our first drink and departed to the next bar above us. We repeated this procedure a number of times until we arrived at the bar on the 15th floor next to the casino. As it was quite late by this time we had the bar to ourselves. A sound of laughter from the room behind the bar alerted us that it had some patrons after all. On entering the room we saw about ten young good-looking ladies sitting around a circular table. In their midst sat an older lady with a telephone in front of her. We had seen her a few times on the beach with her grandchild. The group was a very convivial one and invited us to join their company which we did. We had a very lively repartee and considered ourselves very witty indeed, or at least we thought we were. Every few minutes the phone would ring and the old lady would scribble out a number that she gave one of the young ladies who would immediately take her leave. It soon penetrated our confused minds where we were and what was happening so we hurriedly departed. When I reached my room I romantically rang my wife at home to declare my devotion for the day that was in it. For some reason she did not reciprocate. It was four am in Cork. I also marvel at the wifely ability to smell alcohol over the phone. It is a wedding anniversary I would prefer to forget but for some reason I am frequently reminded of it.
at 3:51 PM No comments:

I went to Cork's St. Patrick's Day Parade this year. Or rather, I was told to go, by two of my granddaughters who were marching with Ballinlough Brigíní. Childhood  memories of parades gone by recalled cold and often wet days, featuring a damp parade of trucks polished up for the day, a marching band or two, and schools of Irish dancers bravely keeping their blue-kneed balance on trailers in tow. Mór-shiúl Lá Fhéile Pádraig. Fast forward to 2014,  and we saw an altogether different parade, including gigantic figures on stilts, trick cyclists, fire-eaters, community groups and colourful squads of new Irish from many countries and several continents.  The rain threatened, and then retreated. The Brigíní marched past very early in the column, and we picked the girls up in time to secure them a vantage point opposite Eason's in Patrick Street. So, I got to see the parade almost twice, if you follow me.  It was now almost 3pm and I had not eaten since 8.30am; fantasies of blueberry muffin and café latte came to mind, but all the shops in Merchant's Quay were closed.
I struck up a conversation with a lady from Germany, who really enjoyed the spectacle. She had been cautious about coming, as there had been mention of drunken behaviour on the feast day. Striking my Helpful Irish Tour Guide pose, I explained that the penitential season of Lent was strictly observed in the past, with many drinkers going on-the-dry for forty days. For these heroic efforts, St Patrick's Day, midway in Lent offered a beacon (and a beaker!) of relief, when resolutions were set aside. Thanks to St Patrick, children gorged on sweets and chocolate, adults on beer and spirits.

Handily enough, as I told my tale, we were standing close to THE STATUE, Cork's centre of gravity. Here stands the life-size bronze of Fr Theobald Mathew OFM Capuchin (1790-1856), Apostle of Temperance. He is the only person to have a statuary monument on Pana and on O'Connell Street in Dublin. I did explain to the visitor that things could get messy with drink later in the day, and that Patrick Street was not the best place for a solitary stroll after dark.  Fr Mathew began on 10th April 1838 with the establishment of the Cork Total Abstinence Society which relied on one enduring act of will to keep a person sober for life.
It was called simply The Pledge:
"I promise to abstain from all intoxicating drinks except used medicinally and by order of a medical man and to discountenance the cause and practice of intemperance."
It could be made by anybody, either with or without an alcohol problem. Father Mathew did not believe in gradual approaches or temporary commitments. He advocated a promise that meant complete commitment. It did not bind like the vows of marriage, but the principle of permanent commitment was the same. Fr Mathew believed that as long as the act of will continued, it could overcome all difficulties.
In less than nine months no fewer than 150,000 names were enrolled as taking the Pledge.  At its height, just before the Great Famine of 1845-49, his movement enrolled some 3 million people, or more than half of the adult population of Ireland. In 1844 he visited Liverpool, Manchester and London with almost equal success. Let's get our terminology right at this point. Temperance suggests drinking in moderation, but Abstinence means total avoidance. So Fr. Mathew's movement asked for a pledge of abstinence, other than under doctor's orders.

The Pioneer Total Abstinence Association of the Sacred Heart was founded by Fr. James Cullen, Jesuit, in Dublin, on 28 December 1898. Fr. Cullen was concerned with social issues, and his motivation in setting up the Pioneers was to address the enormous damage that he saw excess alcohol was doing in the Ireland of his times. Many workers were heavy drinkers, and alcohol was the greatest drain on the weekly earnings of the family.
In the early 1950s, I took part in a mass induction into the Pioneers (PTAA).  This being the era of obedience, we were not offered a choice. The induction was conducted by a Pioneer priest with our fourth class at Scoil Chríost Rí. We pledged three things: to abstain from alcohol until the age of 18 years (referred to as "The Heroic Sacrifice"), to say the Pioneer prayer twice a day, and to bear witness by wearing the junior pioneer badge at all times. The PTAA has always been underpinned by devotion to the Sacred Heart, and its emblem reflects this.
When you are nine, and receive a badge and a certificate, you feel quite proud. At Confirmation time, the pledge was renewed and we received a slightly classier pioneer pin. This was about the time that we did our oral Irish exam for An Fáinne, another badge to pin to your jacket. I loved badges. At the Confirmation pledge, one boy in class stood up and refused to renew it. He was whisked off to the principal's office, but no punishment followed. Perhaps the same principal was fond of a drink.  By the early 1960s, those wearing both An Fáinne and the Pioneer pin were often derided by their swinging contemporaries. In the final year at school, I developed a taste for Murphy's stout, and the Pioneer pin was quietly tucked away. But I still wear An Fáinne with pride, Buíochas le Dia! 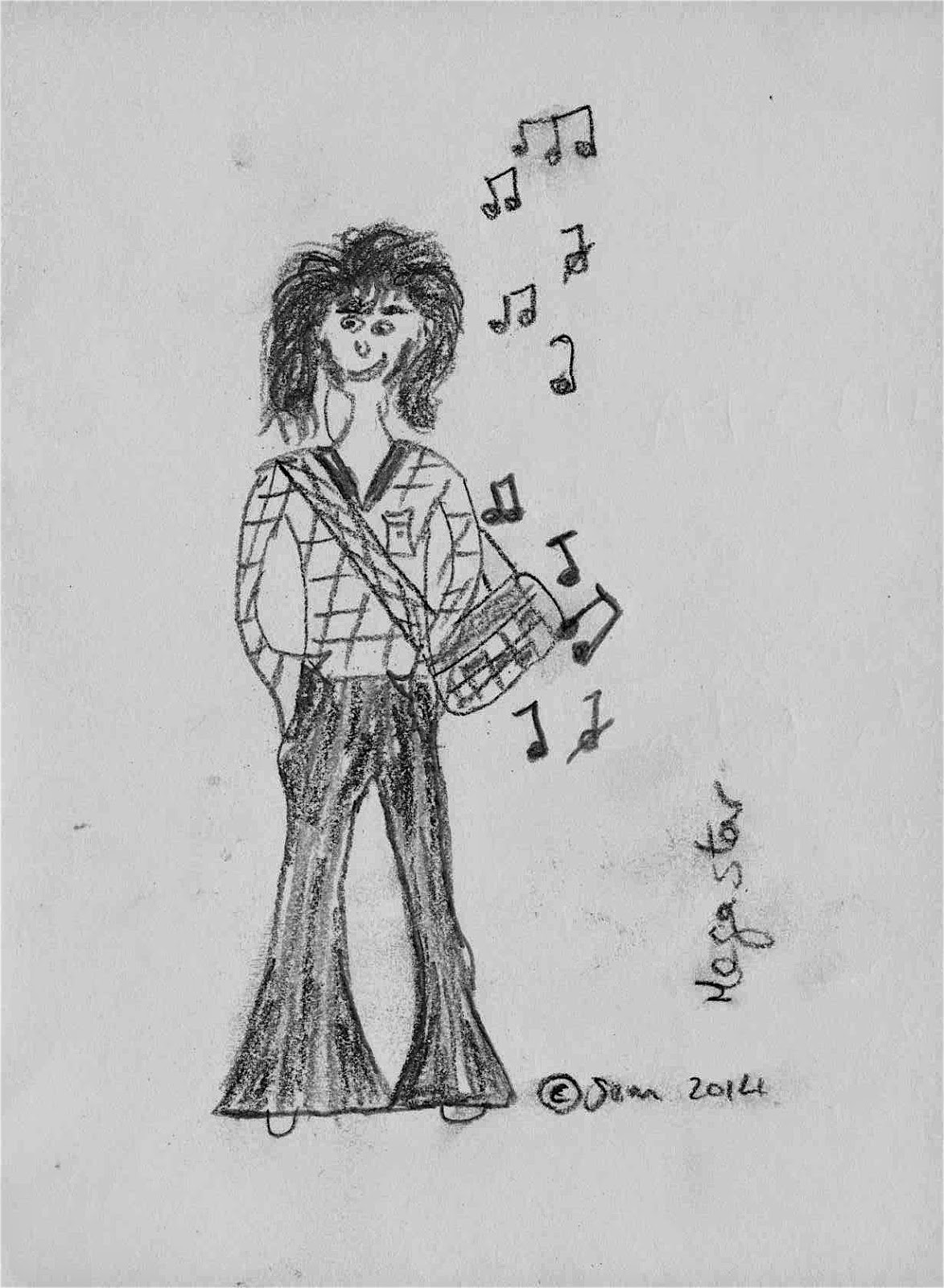 This is a person, riding high,
High up on this machine over the sky,
Carrying a case strapped around his shoulder,
Passengers jump on.

They're beckoned to be seated,
Kindly, carefully and collectedly,
You come along to each in turn,
'The fare please',
Its handed over with a smile and a nod.

I smile …this dark haired man,
With soft wavy shiny hair to shoulders,
Resembles Joey from Def Lepoard,
Or Mick from 'The Stones',
'Give him a guitar and not the cash register '.
We drive on up over the crest of the rolling hills in the city.

We're in an expedition I sense,
'All aboard now' as we whiz along.
It's a double decker,
Passengers all seated happily,
Gazing at the' roller- rocker',
And driver engaged in stilted conversation.

The button is pressed; 'bing' and we stop.
Off we go again on to the 'big street' '.
And mostly all alight,
I smile and he smiles back,
I shake my head in disbelief,
A bus conductor makes such a difference.

Along comes another fan,
We chat, "It's the experience on board that makes the journey so enriching",
All to see this 'mega star', so rare now.

We meet at the Cork City Central Library on Grand Parade on the 2nd & 4th Thursday of each month from 12:30 p.m. to 2:00 p.m. No membership fee! Just call in, listen, join in. You will be very welcome.

The Cork Non-Fiction Writers Group Welcomes you to our blog. Here you will find a variety of nonfiction work ranging from poetry, memoir, essay, etc. Topics include: nonfiction essay, childhood home, subjective realities, other times and places, humour, other decades or history, where writing takes us, and poetry.

What is non fiction? On this we agree with Rebecca McClanahan who wrote: “When we write nonfiction we relinquish our right to change what happened to suit our imagined version. The creative part of nonfiction lies elsewhere, in the way our imaginative eye views the world – selecting details, combining and recombining information, and reshaping experience....When the eye of imagination is engaged, it illuminates the artful possibilities hidden within actual events."

We meet at the Cork City Central Library.