Visitors of the Night: Are all Georgian houses haunted? | Marie Guillot, October 2010 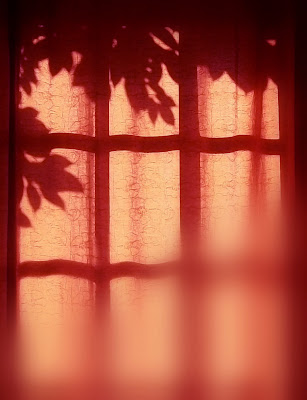 Visitors of the Night
Are all Georgian houses haunted?
by Marie Guillot, © October 2010
A scream. Then we hear Lina trying to force open the door of the old library where we are sitting. In a state of frenzy, she finally succeeds and enters the room. She is white as a ghost.
“I knew your house was haunted. They all are when they are so old, especially in Ireland.”
Having lived for 12 years in that tri-centenarian Georgian house, I thought I knew it inside out.
Lina and Garry, our American friends, are visiting us for the first time this evening.
“What happened?” I asked.
“I saw a ghost. I know you won't believe me, but I saw it moving.”
I offered:
“Let's retrace your steps, Lina. You'll show me where you saw the ghost.”
Reluctantly, holding my arm, she leads me back through the dimly lit lobby, towards the kitchen.
Then she turns around.
“Look over there. That's where I saw it.”
We are now facing the front door of the house; actually an inside glass door, preceding the final porch which has another door, the one visitors would come at.
Both of us are staring, holding our breath.
In a flash, I see a shadow moving behind the glass.
“Did you see it Marie?” she shouts. “Now you believe me.”

We were warned: there are stories about the house. Among them, a ghost soccer team playing on the main lawn; a stain of blood that does not come off a wall; a carriage coming to the front door, heard but not seen.
Since then, we have added our own stories to the repertoire. Namely a ghost dog on a Halloween night; the moaning of a child, audible only in one precise spot upstairs; and, of course, various unexplained rumblings during the winter nights. Not to mention that a piece of gutter fell down shortly after we moved in, as well as a large portion of one ceiling.
As French people, brought up from birth with la raison pure (rationalism), my family was rather excited about those stories. The game was to find a proper explanation for each incident.
Until, one day, or rather, one night...
Back from a late outing in Cork, exhausted and eager to crawl directly into bed, I made my last stop in the upstairs bathroom. There, in the quietness of the place, I heard distinctly a double tap at the window. I froze, looking blandly at the closed curtain. Tap Tap again. I have to admit that I left the room without further exploration.
Against Lina's will, I open the glass door. There, we see two bewildered crouching creatures.
“Martine, Pierre!” I exclaim, “que faites-vous la?” (what are you doing there?)
The young French couple are our guests for the week. Having no English, they had decided to stay out tonight, so as not to interfere with our visitors.
They were only trying to enter quietly without bothering anyone. Now, they are deeply embarrassed by the turmoil they have created. Lina relaxes a little bit, but says that she can still feel something strange about the house. So do I. It's a matter of interpretation... and of pulling the curtain.
at 10:28 AM No comments:

Email ThisBlogThis!Share to TwitterShare to FacebookShare to Pinterest
Category: Holidays

Dateline: Calpe in the Spanish Province of Alicante, July 2010.

It's a challenge being a grandad on holiday. The Ford S-Max diesel growls its way down Avenida de Los Exercitos Espanoles, turns into Calle Gran Bretana, and parks on sandy waste ground. Operation Beach is under my daughter’s command. "You take the towels and togs (swimsuits), you the parasol, buckets and spades, and, Dad, get rid of the recycling. Monika (the au pair), catch the girls’ hands while I take Róisín in the buggy." This highly-trained commando unit is about to establish its beach-head on Playa Arenal.

Email ThisBlogThis!Share to TwitterShare to FacebookShare to Pinterest
Category: Humour

It must have seemed stupendous

Then mortared into place

To the wee Glaswegian school pal

I used to think Martin was an orphan

But his house is as big as an orphanage

Everything seemed so tall there

We meet at the Cork City Central Library on Grand Parade on the 2nd & 4th Thursday of each month from 12:30 p.m. to 2:00 p.m. No membership fee! Just call in, listen, join in. You will be very welcome.

The Cork Non-Fiction Writers Group Welcomes you to our blog. Here you will find a variety of nonfiction work ranging from poetry, memoir, essay, etc. Topics include: nonfiction essay, childhood home, subjective realities, other times and places, humour, other decades or history, where writing takes us, and poetry.

What is non fiction? On this we agree with Rebecca McClanahan who wrote: “When we write nonfiction we relinquish our right to change what happened to suit our imagined version. The creative part of nonfiction lies elsewhere, in the way our imaginative eye views the world – selecting details, combining and recombining information, and reshaping experience....When the eye of imagination is engaged, it illuminates the artful possibilities hidden within actual events."

We meet at the Cork City Central Library.